BioMart is a simple, web-based tool for mining data from the WormBase ParaSite database.

There are two main parts to using BioMart, which can be navigated between in the menu on the left of the tool: 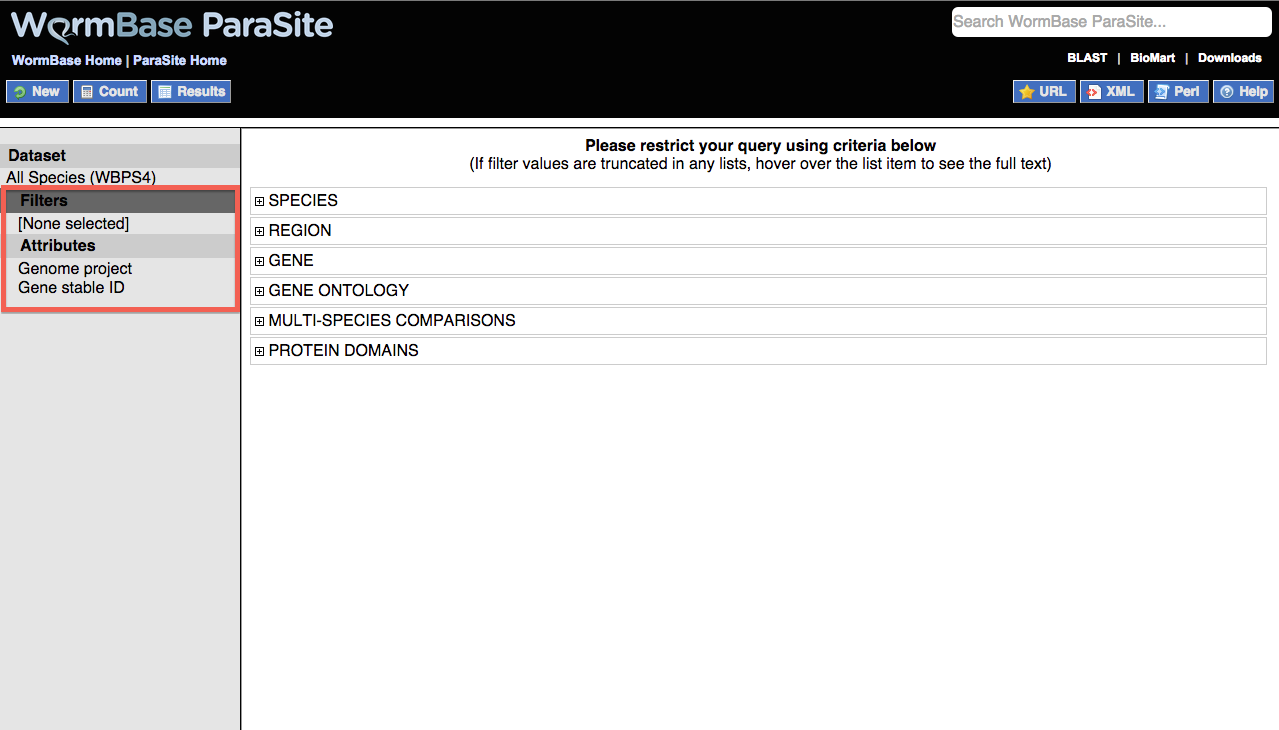 Filters are shown as a list in which each of the items can be expanded by clicking on the + sign: 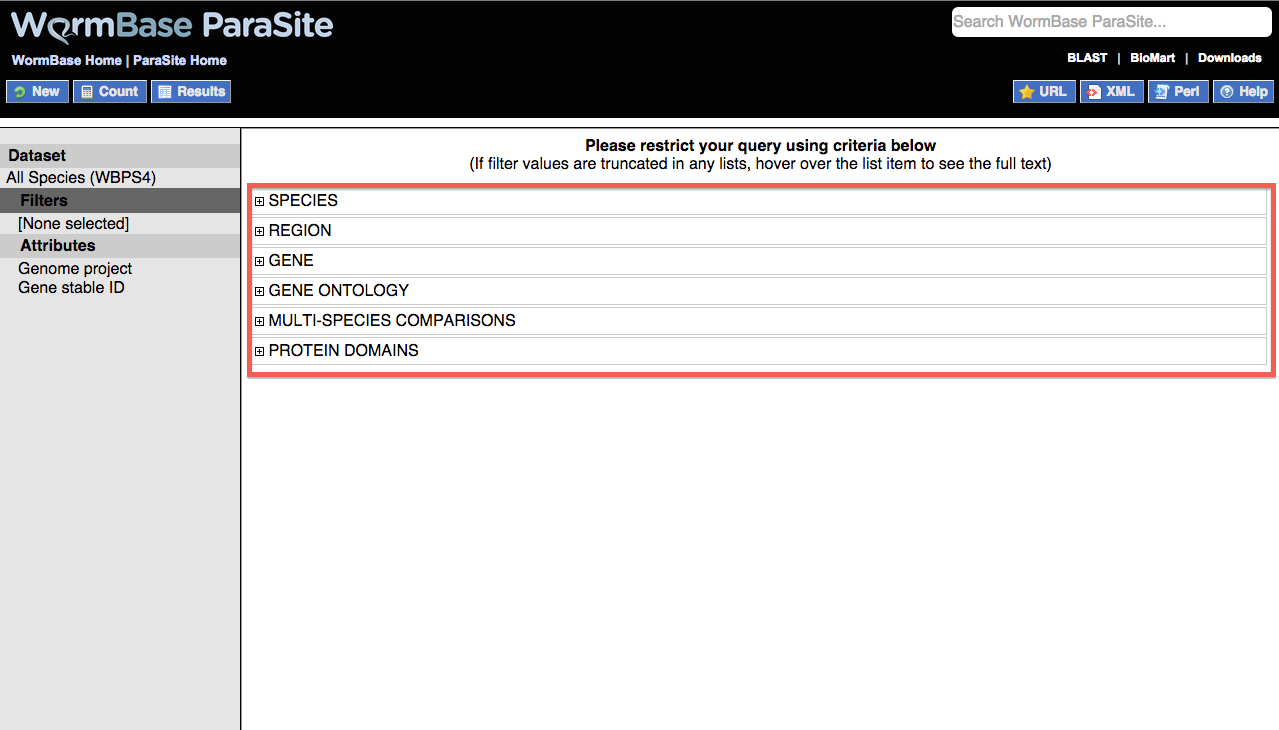 The following filters are available:

By default, BioMart is set to return a two-column list with genome assembly ID and gene ID e.g. 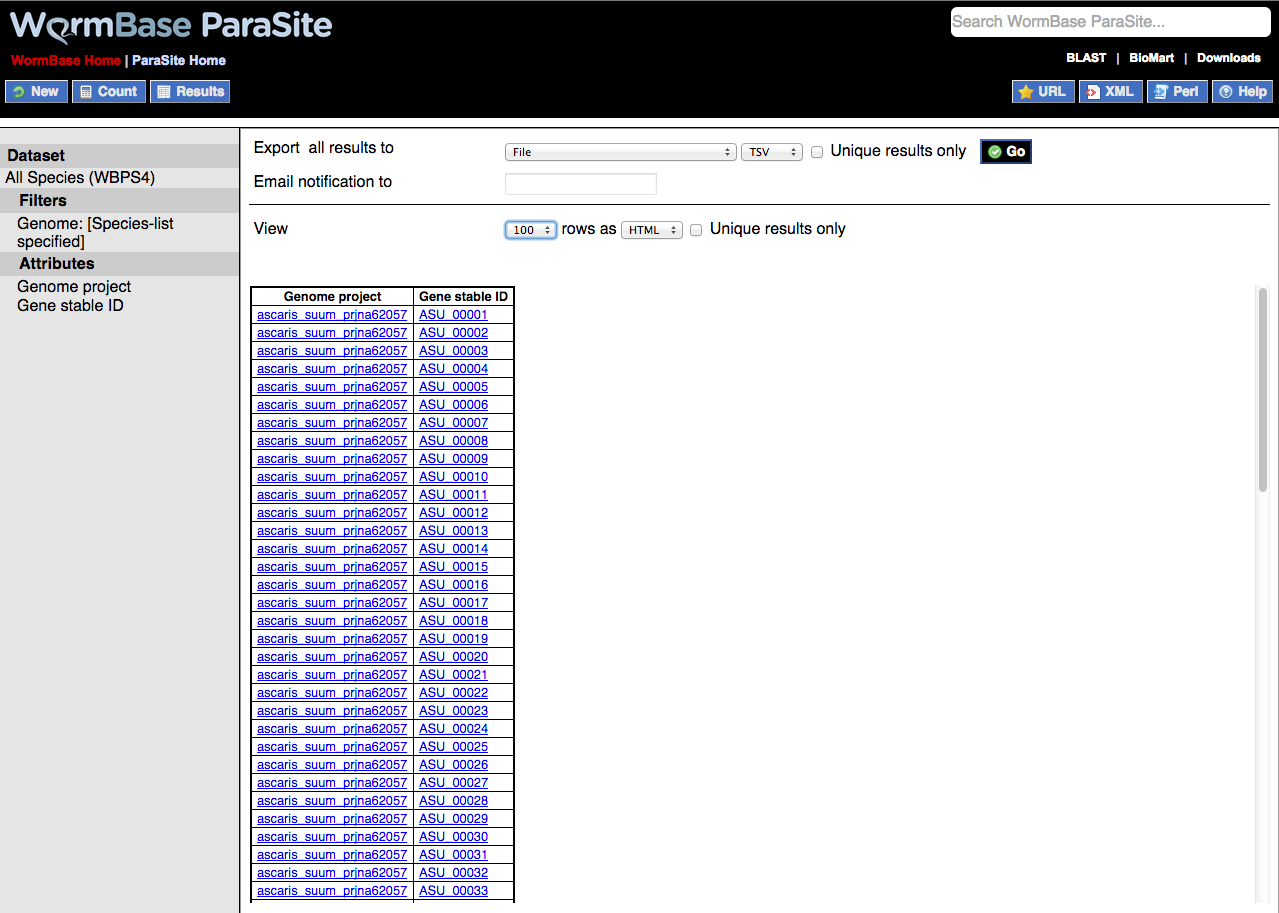 However, the Attributes field can be further configured to return additional columns of data. These types can broadly be divided into four groups: 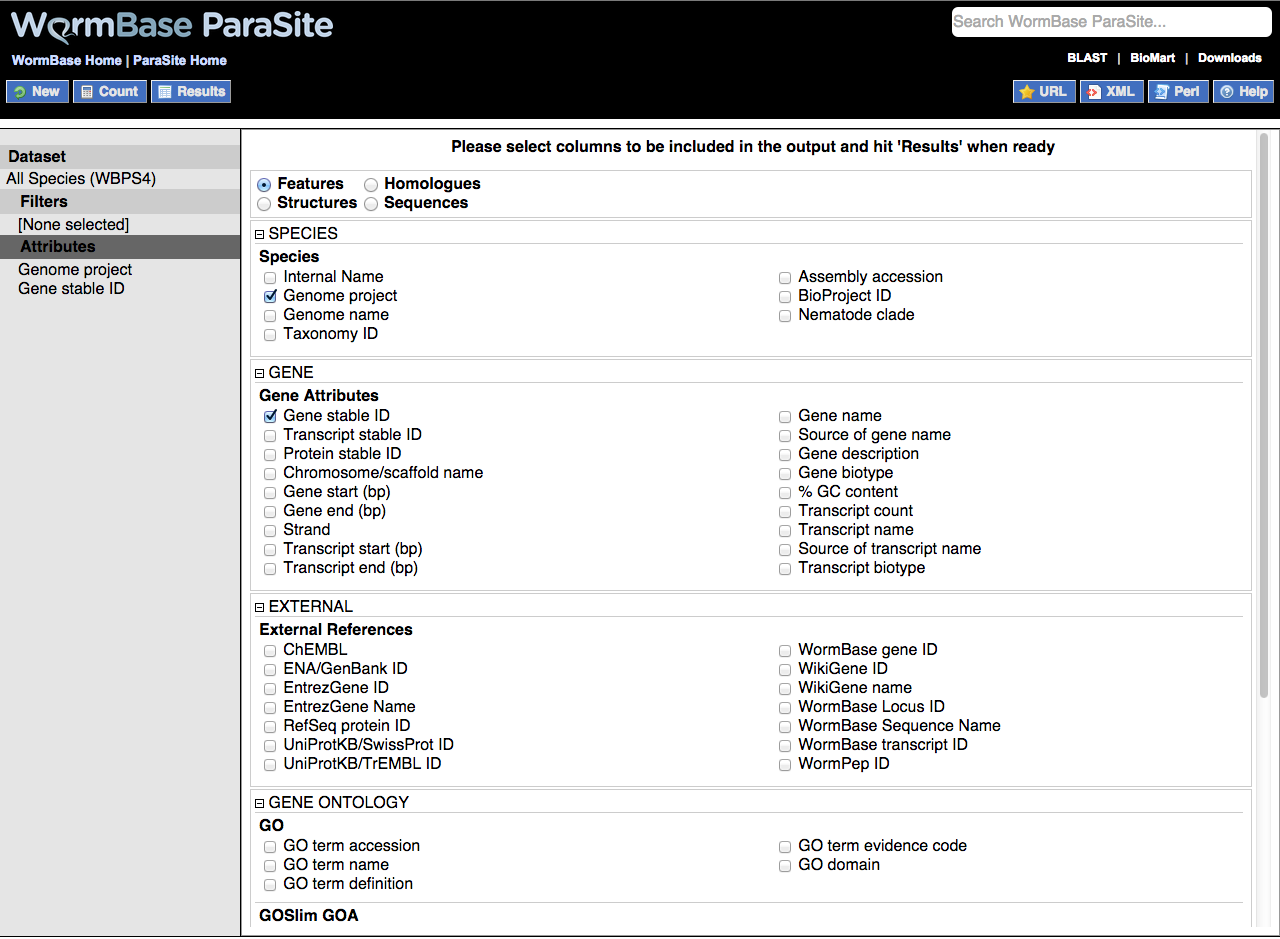 By default this option is set to return genome project information (e.g. ascaris_suum_prjna62057) and gene ID as two columns.

External references are cross-references to equivalent entities in other resources such as UniProt, RefSeq and ENA/GenBank as well as all WormBase IDs.

Protein domain adds columns for protein attributes such as InterPro domains and descriptions.

Exons in addition to Gene and Species attributes, this gives you output options for the exon structure of the gene such as CDS start and end and exon rank within the cDNA.

Homologues gives the option of exporting orthologs or homologs from one or more chosen species for a set of input genes. For example "given me all C. elegans orthologs for the B. malayi genes eat-3, eat-4 and eat-6, eat-16 and eat-20".

A very useful feature of BioMart is the ability to output sequence in many different configurations: 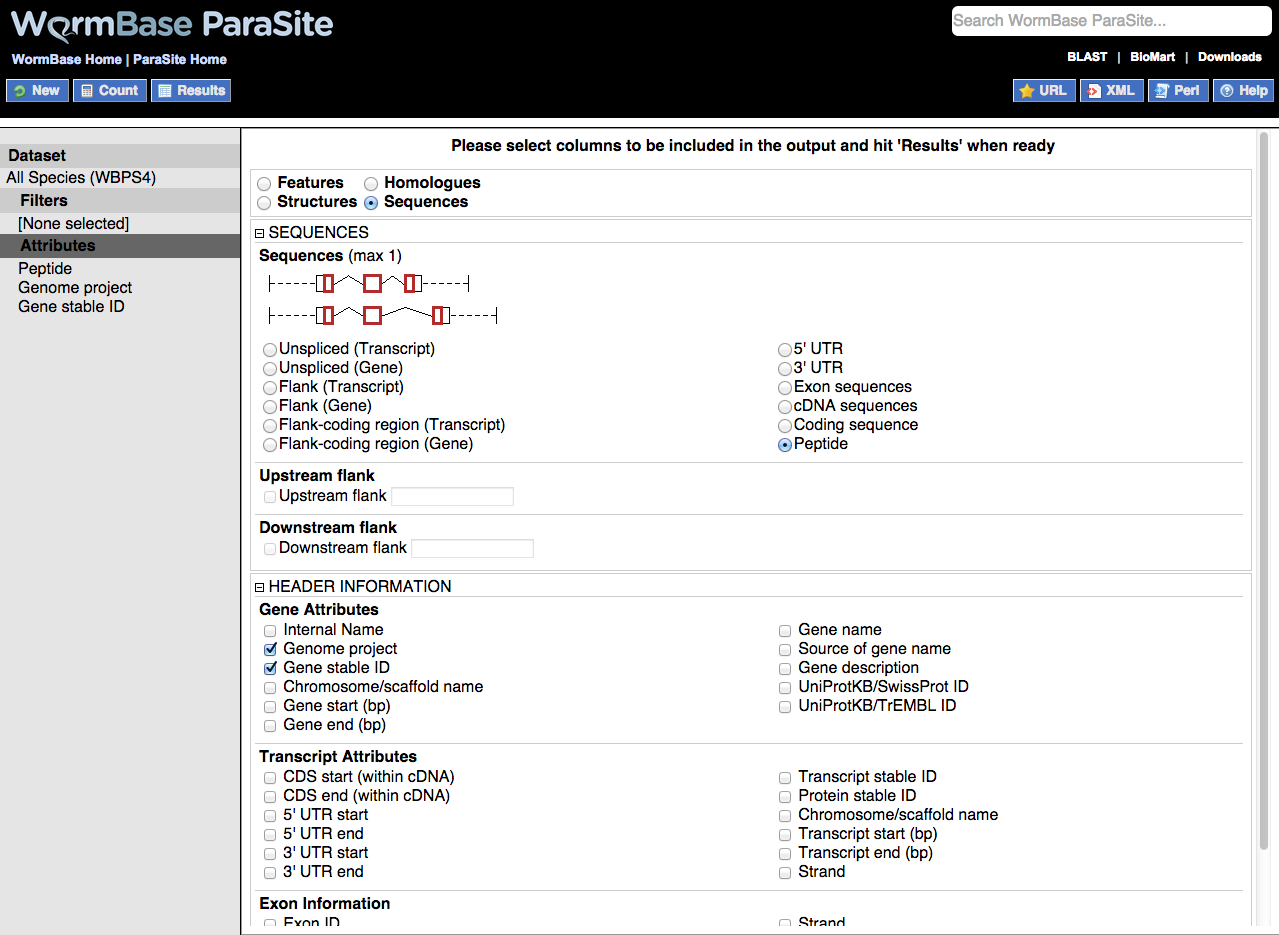 Output is a FASTA file where additional information can be given in the header lines. The sequences themselves can be generated using the following configurations. Only one option can be selected at a time.

Sequence adjacent to a gene. Upstream flank or Downstream flank needs to be specified in the panel below, along with the length of the flanking sequence required in base pairs.

Sequence of the 5' untranslated region. Note that this sequence is only retrievable if the 5' UTR has been annotated for the gene(s) in question.

Sequence of the 3' untranslated region. Note that this sequence is only retrievable if the 3' UTR has been annotated for the gene(s) in question.

returns all exonic (coding) sequences. Each exon is returned as a separate sequence with its own header. Check 'Exon ID' in the Header section to get sequential numbering of exons within the gene/transcript.

All coding sequence including 5' and 3' UTRs.

All coding sequence excluding 5' and 3' UTRs.

Protein translation of the coding sequences. For genes with multiple transcripts, all transcript peptide sequences are returned.

Including additional information in sequence headers

Additional information can be added to sequences headers under the HEADER INFORMATION section. These extra columns include various gene and transcript attributes. Useful attributes to include are 'Gene name' and 'Gene description', and 'Transcript stable ID' which will allow you to differentiate transcripts where multiple transcripts exist for the same gene.

In addition, where exon sequence is being returned, several options are available under the Exon Information section for adding information to the headers of individual exon sequences. A useful thing to include would be 'Exon ID' which numbers the exons sequentially within the gene or transcript.

Once both the Filters and Attributes have both been set for your query, click the Resultsbutton to submit your query. The Count button gives you a preview of the number of results expected from the query. This can be useful to check if the size of your results is as you expect before running the full query.

3) Viewing and Downloading your Output

BioMart results can be viewed and downloaded from the results page.

Results are displayed on the page by default as a simple HTML table, and can also be shown as CSV (comma-separated values) or TSV (tab-separated values). For sequences the display format is FASTA.

Establish a connection to the WormBase ParaSite BioMart

An example: get all the S. mansoni genes with a C. elegans orthologue

Tip: to replicate a query constructed in the web browser, click the "XML" button. From here, you can see the relevant filter and attribute names required to construct the same query in biomaRt.